Where do you get your ideas for children’s books?

That time-worn question will forever be on the lips of all who seek to create something visually, or conjure up an image or situation with words! To a child it’s the most complex question they’ll seek to understand, second only to why?

During my many author book signings and school presentations, I’ve always maintained that the best ideas are culled from real life situations and experiences. Nothing new here … we’ve been told this fact since we were children, but we don’t always pay attention to the meaning until it hits us smack dab in the face … or right between the eyes. Then it might be too late.

It’s the same with a skunk and a black labrador princess! You can tell her not to go near a skunk, you can show her the skunk in the yard, and you know for a fact that her olfactory senses (about 2 million times sharper than yours!) detect that unmistakable odor long before you even have a clue … but alas, you sometimes cannot avoid a confrontation! 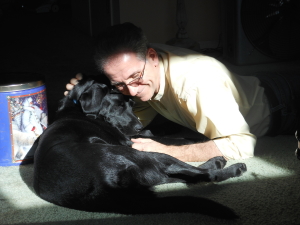 That was the case last night … skunks frequently patrol our neighborhood and we have a mutual respect for each other … they throw their scent whether they see the fenced animal or not, letting them know their boundaries. On a last venture outside before bed, Sophie decided to shove her nose under the fence to investigate things a bit further and whammo! Tail tucked between her legs, eyes half-glazed over with what appeared to be Cool Whip foaming from her mouth, she made a beeline for the house and safe refuge! And yes, there’s a happy ending in the knowledge that she didn’t get sprayed directly in the eyes, and that we have a recipe that destroys skunk odor on contact! Getting rid of the smell in the house is another matter entirely.

The Lesson to the Author

Such real life experiences often appear unannounced. If we recognize and respect them, they can help us tell better stories, funnier kid’s stories, real life stories. I’m thinking of using Sophie’s late night adventure in my next children’s book, the third installment in the adventures of Jasmine, Topo & Roxanne … to be entitled Topo Under the Big Top!, and I plan to once again feature a bevvy of fun and sometimes unusual animals in the storyline … and a skunk might just be the wild card in the mix! I’ll keep you posted. In the meantime, I’m enjoying Life alongside my furry little felon … I have a feeling we’ve only just begun to learn from each other!