The fun site of discovery for the child in all of us!

So when I decided to move into the realm of writing and illustrating kids books, my first choice was to create a fun adventure about my best friend … my black lab, “Princess” Jasmine. We rescued each other years ago, and I found that through her eyes I could weave a tale of friendship, second chances and just being yourself that could be entertaining and educational to kids!

To my delight, I discovered I had more ideas than could fit into just one story! It began with There’s A Crazy Dog Under the Palace!, continued into the sequel Who Ate the Gelato?! (released earlier this year) and now I’m beginning work on the third and last book in this series, entitled Topo and the Second Chance Circus!  With each new tale Jasmine the black lab, Topo the wise little mouse, and Roxanne the Tibetan mastiff discover that in most situations three heads are better than one, and friendship is the most important lesson of all!

The sequel is HERE!

You can order Who Ate the Gelato?! TODAY by clicking  Buy Now! 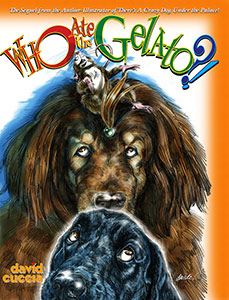 There’s A Crazy Dog Under the Palace!

Who Ate the Gelato?!

Chi Ha Mangiato il Gelato?!  While Sicily and Europe endure a massive heat wave, our heroes travel across Europe to Tibet, in search of ice and an enigmatic character called the Brain!

For years, as an animal lover and advocate for animal rights, I’ve used my artwork and abilities to aid various rescues and shelters with their fundraising events.

We adopted our black labrador, Jasmine from the Franklin County Animal Shelter in 2005 and they have become one of my favorite agencies to work with! Over the past year I’ve become even more pro-active by giving presentations to various elementary schools, talking about my book and the creative inspiration behind it, while making children aware of the plight of homeless animals everywhere and what they can do to help.

I’m proud to say these wonderful kids throughout central Ohio have gone above and beyond my wildest expectations and with their ingenuity and big hearts, having raised incredible amounts in donations, for the Franklin County Animal Shelter / Friends of the Shelter, so that they may continue to help our four-legged friends. Grazie, kids…you’re the BEST!