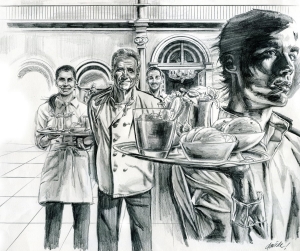 On with the show!

Losing our beloved black lab Jasmine, late last October to a rapidly spreading stage 4 cancer was devastating … but as they say, the phoenix will always rise from the ashes. I’d made a commitment not only to myself but to my readers to write and illustrate Who Ate The Gelato?! by late July of 2014,  further chronicling the adventures of Jasmine, Topo and Roxanne but as the date approached like a speeding locomotive I found myself nowhere near completion of the task! What was I going to do? I needed to tackle this problem as quickly as possible, not only maintain the readership I’d developed but to keep the characters fresh in everyone’s memory!

What I’ve found along the way is that no matter how much you bury yourself in your work, and no matter how dedicated you are to your craft, se e`cosi`e`cosi`…..it is what it is! That simply means  you need to know when you’re setting impossible deadlines for yourself and come up with an alternative game-plan that solves the problem! This was the case with Who Ate the Gelato?!, and once you take a cold, hard look at what you’re doing to yourself, the solution dawns on you! You can’t produce the art or story any faster than humanly possible, and you can’t let the fear of not meeting kid’s expectations drive that locomotive either! You have to maintain control, firm up your resolve and push forward, one step at a time!

I’m glad I took the time to rethink my priorities and establish a new deadline as there are many more problems to solve before this children’s book sees the light of day! For starters, this sequel is meant to fit within the same 44 page format as There’s A Crazy Dog Under the Palace!, but there’s already more content than meets the eye! First, there are more illustrations than in the first kids book, and they’re far more complicated in subject matter … that means I need to handle them delicately to maintain the depth of atmosphere and character development I’ve invested into each drawing. Then there’s the storyline which takes place not only in Sicily at the Palazzo Comitini, but shifts to different locales such as France, Italy, Germany, Greece, Turkey and Tibet! Then there’s the introduction of at least 8 new characters, not to mention the “cameo” appearances by homeless dogs of every shape, size and color! Whew! No rest for the wicked, right?…but that’s also the fun of creating a children’s book!

So when all is said and done, it looks like Who Ate the Gelato?! will be ready for release by early Spring of 2015 … it may not meet the original expectations I’d set for myself, but I think my readers will find this effort well worth the wait!